‘Tunnel rats’ and an engineering marvel

Located beneath the Salish Mountains, the Flathead Railroad Tunnel, just southwest of Trego, is an engineering marvel. Every day, more than 40 freight trains and at least one passenger train still use the 7-mile-long underground corridor. But for Greg Osler, the tunnel is full of more than freight and passenger cars, it’s full of memories.

AFTER HELLOS’s father sold the family sawmill in Plum Creek in 1969, an 18-year-old Osler needed a job. With the help of a friend, whose father was project supervisor, Osler spent six months in the tunnel working for the Walsh-Groves company, helping to pour and shape the cement lining of the arch of support.

“I just need a job and this one was available. I walked in, jumped on a manhaul and headed into a tunnel I had never been in. It kind of opened your eyes,” Osler said. “You definitely have muscle on your shift. You laid down and vibrated with that big pipe, then took it all off when you were done. I was very hard when I quit. The tunnel rats weren’t people you wanted to mess with, that’s for sure.

At the start of each shift, Osler and his co-workers would jump out of the east portal and make their way through the wet, muddy tunnel to where the cement operation was rapidly progressing.

With Walsh-Groves supplying many of its own workers from out of state, Osler was one of the few Montana residents working on the cement laying project.

“The tunnel rats were a unique breed of people. Most of them were from Oklahoma with a few Californians, and they were hard party people, but they were also hard workers. There were quite a few of them,” Osler recalls. “They might be tough, but I’ve never worked with a better group of men, to tell you the truth.”

The cement work was nearly half done when Osler took office in March 1969 and was complete when he left in August to attend college. Records show that crews were able to complete up to 1,700 cubic meters of arch per day.

Although Osler was never injured during the work, a man was killed during one of his shifts when he was backed up by a front-end loader. A total of two were killed during the construction of the tunnel and another was injured in a rockslide.

“I was always told to wear boots that were too big for you. We were on a fairly dry bed of cement one day and a wet load came in behind and blocked our window. We had to climb all the way out of the forms to get out I ended up having to leave my boots in there and walked out with just my socks on,” Osler said. “They were very into safety, but it was a dangerous place to work. “

LEFT OSLER for college in August 1969, but would find himself in the Flathead Tunnel when he started working for BNSF Railway a few years later. After becoming a locomotive engineer for BNSF Railway in 1979, Osler passed through the tunnel several times over the next four decades as he “travelled every inch of track from Wilson, North Dakota to Spokane”.

Having helped build the tunnel, Osler says it was always interesting to drive through it taking advantage of the unique fan and ventilation system that circulates air for eastbound trains.

“The original reason for these fans wasn’t to blow diesel exhaust. They were originally put in there to pump cool air to the uphill locomotives so they wouldn’t overheat. that’s why they were put in there,” Osler said. “I’ve been through that tunnel hundreds and hundreds of times when you couldn’t see two car lengths in front of you at because of the exhaust that was in there. Later they decided that the diesel smoke was carcinogenic and they should get it out of there. They gave us little masks with a carbon filter and that was supposed to help us with the exhaust, but I don’t know how much it actually helps.

While Osler said driving locomotives through the tunnel was always an interesting experience, it could never compete with what it was like to help build it.

“It was a wonderful job. I always thought going through that tunnel was amazing and the Walsh-Groves company did a fantastic job building it,” he said. “It was a great company to work for and it was a great operation. They kept their men happy and that’s why they did so well. 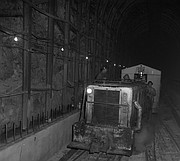