Jun Quentin October 14, 2022 Locomotives Comments Off on The Flying Scotsman steam train is at King’s Cross station this weekend 8 Views

R&D MxV Rail: A look at locomotives with LUTIS

The Flying Scotsman was built in 1923 as the first locomotive of the new LNER (London and North Eastern Railway). Originally a single 1472 locomotive, it acquired its name in 1924 when it was selected to appear at the British Empire Exhibition in London and named after the daily 10 hour rail service between London and Edinburgh .

The locomotive retired from regular service in 1963 having covered over 2 million miles and passed through a number of private owners until it was purchased by the National Railway Museum in 2004 for 2.3 million after a major fundraising campaign to save her. for the nation.

The locomotive returned to the main line in 2016 after a decade-long restoration project and is now a regular provider of heritage train journeys for passengers and a delight for people who watch it pass by on the tracks.

Next year will mark the centenary of the steam engine, and a number of events are planned across the country.

The first, this weekend, is that the locomotive is at King’s Cross station.

The Flying Scotsman will set up light steam on Pier 8 on Saturday 15th and Sunday 16th October to allow the public to admire the locomotive. Platform tickets to get close to the locomotive are all sold out, but you can view the steam engine from the end of the platform, or from nearby platforms if you take a train while platform 9 is empty.

As usual with railway photography – no flash or tripod, and remember that other people want a photo too, so take yours and be nice moving quickly to one side.

As part of the centenary celebrations, author Michael Morpurgo has written a book, Flying Scotsman and the best birthday ever, which tells the story of a little girl called Iris who dreams of being a train conductor when she grows up. The book was illustrated by illustrator and author Michael Foreman. 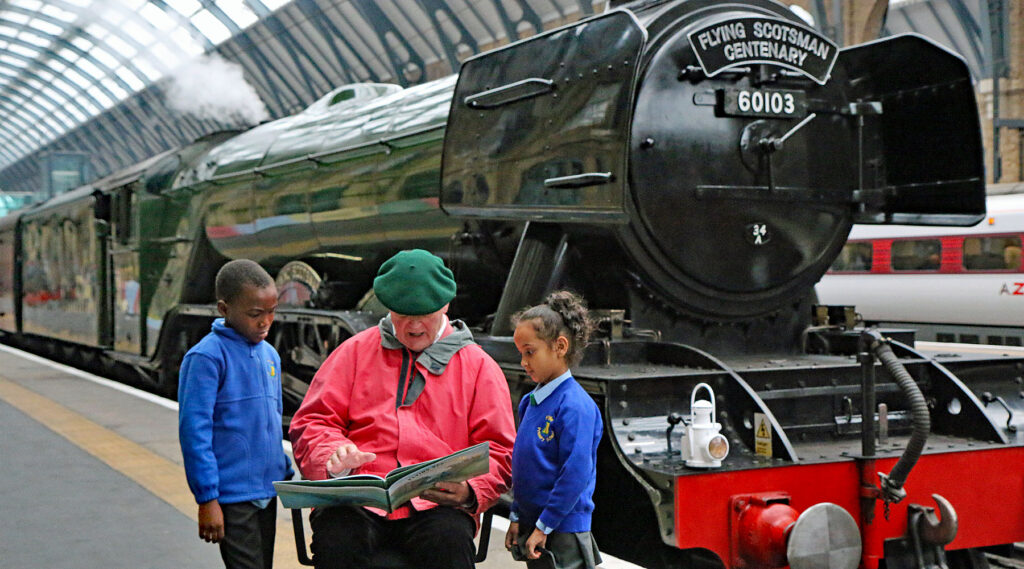 Michael Morpurgo reads to two pupils from Argyle Primary School who have been invited to see the steam locomotive.

This weekend’s event coincides with the 170th anniversary of London’s King’s Cross station, which opened to rail passengers on October 14, 1852.

Sir Peter Hendy, Chairman of Network Rail, Trustee of the Science Museum Group and Chairman of the National Railway Museum Advisory Board, said “King’s Cross and Flying Scotsman have a glorious history, and it is important to look back and celebrate that , but we’re also reaching out to the next generation, both to travel by train and to be inspired by engineering and technology.

This weekend, travelers taking the train at King’s Cross will be thrilled by the sight of a way of traveling from a century ago, and the occasional explosion from the raging engine. 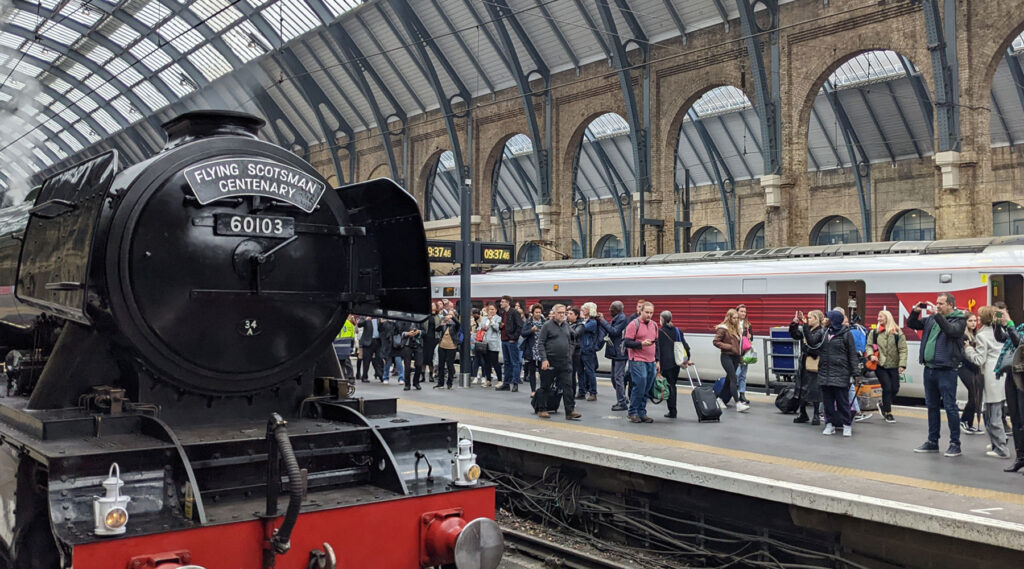 *yes, I know it’s a locomotive, but most people call it a steam train, and the railway terminology might be off-putting to the general public who might spot this article and not come and have a look eye. Which would be a shame.

Railways in Movies: North by Northwest