Sydney’s rail network has come to a standstill, with services being delayed or canceled as flooding and bad weather cause disruption to the network.

“Due to extreme weather conditions, significant delays and cancellations are expected on most Sydney trains, NSW TrainLink intercity and regional train services. Trains are running on a modified schedule. We strongly recommend avoiding non-essential travel,’ Sydney Trains said in a statement.

A Sydney Trains staff member told Daily Mail Australia that the East Hills line had been closed due to flooding.

The North Shore and Bankstown lines had significant speed restrictions due to landslide concerns.

Buses are replacing trains between Schofields and Richmond in both directions due to flooding on the tracks. 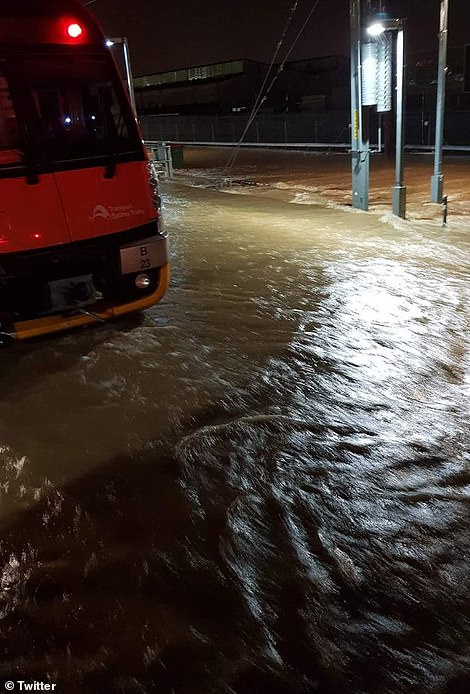 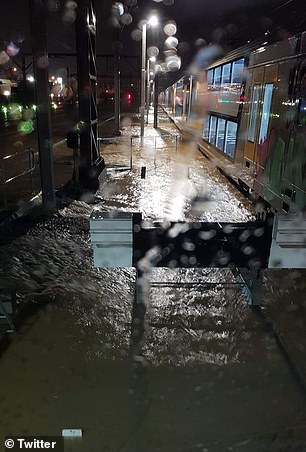 Train lines in Campbelltown were flooded in the early hours of Tuesday morning, with commuters urged to avoid the city’s rail system altogether and expect major delays

Many frustrated Sydney commuters have been forced to wait hours for some services.

‘It’s only 1pm and all Sydney Rail timetables have gone to hell,’ said one commuter. “Check before heading to the station.”

Another said: ‘Dropping expectations that Sydney trains could take me from Central to Parramatta today. It wouldn’t be so bad if they didn’t keep announcing that there will be a train coming in 15 minutes, to drop it off before it arrives.

A commuter had been stuck at the Erskinville station for over 45 minutes trying to get to Redfern.

Greater Sydney’s flood crisis intensified on Tuesday afternoon with parts of Penrith in the far west of the city and areas of Manly on the northern beaches underwater. 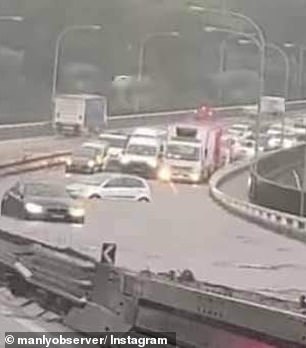 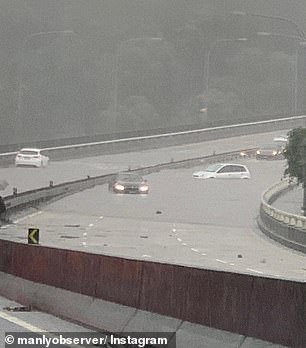 Motorists have been warned not to attempt to cross the Roseville Bridge, which connects the north end of town and the city, with reports of vehicles stuck on the bridge starting to float 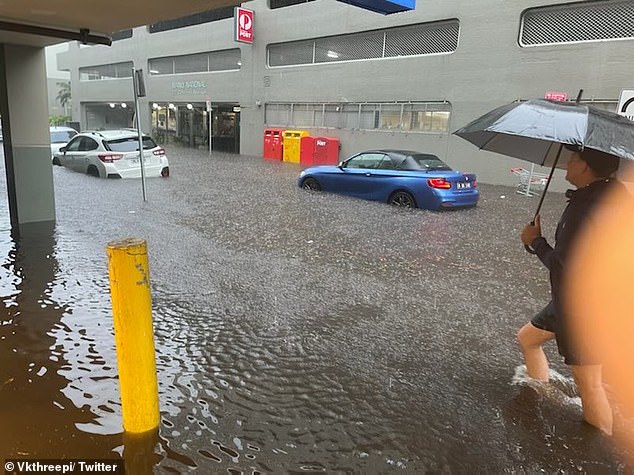 Central Avenue in Manly, Sydney’s northern beaches, was ankle-deep in water on Tuesday afternoon as residents who parked their cars in a nearby car park were unable to escape

Meteorologists have warned the city of entering a critical few hours as the east coast is battered by torrential rains and high winds.

Two bodies, believed to be those of missing mother Hemalathasolhyr Satchithanantham and her 34-year-old son Bramoothand, have been found near a storm drain in Wentworthville, not far from where their tailgate was found.

Although the bodies have yet to be identified, sources believe they are those of the missing mother and son.

Dean Narramore of the Bureau of Meteorology warned this morning that flooding is expected on the Queensland coast to the Victorian border.

“(There are) 24 hours or even 48 difficult hours ahead,” he said. ‘Even if the rain stops on Wednesday and Thursday, which it will, there is still plenty of water in these rivers.

Mr Narramore said the amount of rainfall was already above last week’s ‘rain bomb’ and approaching levels seen during the March floods of last year.

The NSW State Emergency Service has issued urgent evacuation orders for a number of suburbs including Chipping Norton, Georges Hall and parts of Holsworthy, Lansvale and Milperra.

Other affected suburbs that must evacuate immediately include parts of Moorebank, parts of Warwick Farm, Picnic Point, Pleasure Point and Sandy Point.

“If you remain in the area, you risk being trapped without power, water and other essential services and it may be too dangerous to rescue you,” the order reads.

The SES predicted that even more torrential rain on Tuesday will create dangerous conditions on the North Central Coast, Sydney, Hunter, South Coast and Illawarra.

“Strong winds are expected which could cause trees and power lines to fall. Landslides are also possible, which could block roads.

Damaging winds strong enough to bring down power lines and topple trees are expected to cause further chaos as flood-affected people are urged to unplug appliances during the flash flood.

BoM also asked residents to avoid using their phones during storms, stay out of creeks and storm drains, and keep children and pets indoors whenever possible.

Residents of 10 lower streets in Sussex Inlet were ordered to evacuate at 12pm on Tuesday as floodwaters rise in St Georges Basin.

Damaging winds of over 90km/h are predicted for the Sydney metropolitan area, the Illawarra and those who live on the coast.

Some areas between Sydney and Ulladulla on the south coast have received 100mm to 200mm of rain since 9am Monday.

However, in good news for communities in the Mid North Coast and Hunter region, the rain appears to have eased off for the time being.

Previous Will Tri-Rail reach downtown Miami in 2022?
Next Could China play a mediating role in the war in Ukraine?