Read this book to find out

Jun Quentin May 28, 2022 Asia trains Comments Off on Read this book to find out 17 Views Written by Gurjit Singh, India’s former Ambassador to Ethiopia, Indonesia and Germany, “Harambee Factor” offers a rare deep dive into the prospects for economic partnership and development between India and Africa.

Once considered synonymous with poverty and civil unrest in addition to famine and corruption, Africa has become a new growth pole of the world, with its consumption capacity (given the growth of a middle class) as well as capital absorption, according to a new book on India-Africa economic relations.

Written by Gurjit Singh, former Indian Ambassador to Ethiopia, Indonesia and Germany, the book, Harambee Factor: India-Africa Economic and Development Partnership, offers a rare deep dive into the prospects for India-Africa economic and development partnership. The author notes very early on that “the 21st century, described as the Asian century, is now also becoming an African century”. “Over the past 15 years, Africa’s GDP has tripled, making it the second fastest growing region in the world with an annual average of 4.6%, behind Asia (7.2 %). After a slowdown in 2016, Africa’s growth is rebounding and was expected to reach 4% per year by 2020, before the outbreak of the COVID-19 pandemic. Consumption growth was expected to stimulate this process driven by population growth, urbanization and the purchasing power of an emerging African middle class,” Singh writes.

“For the first time in more than a decade, growth in Africa is largely driven by expanding investment rather than consumption, as well as exports. FDI in Africa increased by 11% in 2019 compared to 4% in Asia, while it decreased by 13% globally and by 23% in developed economies,” Singh said.

It is against this backdrop of sweeping changes in Africa – once seen as plagued by poverty and instability – that Singh examines the twists and turns in India’s relationship with the continent. The narrative is interestingly woven with anecdotes that ensure the reader’s attention isn’t broken.

Once united in their fight against apartheid and colonialism, India began to take a fresh look at Africa at the start of the 21st century and Singh traces the transformation of ties from the year 2000 to the present day through the three India-Africa Summits held in 2008, 2011 and 2015 and other events in between.

India’s first technical and economic cooperation program run by the Indian government that trains people from Africa (and other countries) in the lesser known Industrial Services Training Program (ISTP) run by the Confederation of Indian Industry and the Department of External Affairs is mentioned in a chapter aptly titled “We the People” which chronicles all skills development programs for Africa through the ages.

The evolution of Indian government-to-government loans into Lines of Credit (LoC) that were extended to Africa from the mid-2000s formed the basis of economic engagement with Africa at that time. The lines of credit have helped build infrastructure as well as promote Indian exports in addition to helping showcase Indian skills in project implementation.

From 2004 to 2020, “nearly 200 lines of credit have been extended to African countries for about $12 billion,” Singh notes, adding that “lines of credit have become the mainstay of the new wave of economic engagement. (they have become) a new expansion paradigm for the Indian economic footprint in Africa.In particular, this has supported the objectives of capacity building, technology transfer, trade and infrastructure development.

“The lines of credit demonstrated India’s commitment to assist African countries with strong concessional credit support to achieve their development goals,” he writes.

Other markers of India’s engagement in Africa include the 10 points highlighted by Prime Minister Narendra Modi in a speech to the Ugandan parliament in 2018, the increasing frequency of high-level visits to Africa at presidential, deputy presidential and ministerial. Then there are the 18 new missions that India opened in Africa between 2018 and 2022, increasing the number of Indian resident missions in Africa from 29 to 47. 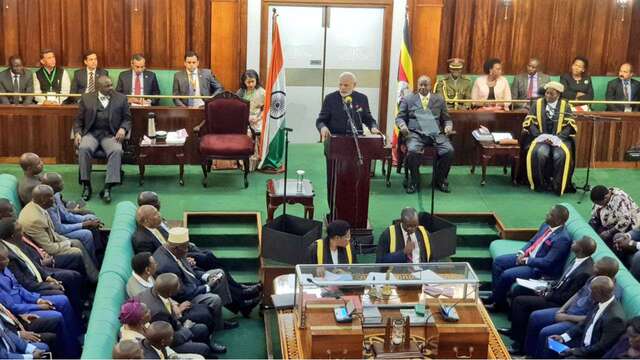 Given Africa’s emergence as a growth pole, Singh advocates that India should change tack from extending lines of credit and consider increasing investment in Africa. This is something that needs to be looked at by the Indian private sector. As Africa plans to merge into a vast free trade area, Indian companies would do well to invest in Africa and take advantage of the regional and continental trade agreements that will soon be in place.

A word on the title of the book.

The word “Harambee” comes from Swahili commonly spoken in East Africa (especially in the Great Lakes region). It means “coming together in the spirit of cooperation,” Singh explains in the preface to the book. The allusion could be to India and Africa walking in tandem, taking steps forward in cooperation.

Singh also temptingly points to a possible Indian connection to the word “Harambee”.

“The Indians who laid the original Mombasa Kisumu Railway often used the terms ‘Hari’ and ‘Ambe’ together as ‘Har-ambe’ when picking up heavy loads or railway tracks. “Hari” refers to Lord Vishnu and “Ambe” to Goddess Shakti. This pronunciation of ‘Harambe’ was adapted by their colleagues to become ‘harambee’ and then absorbed into Swahili,” Singh writes, pointing to another possible connection between India and Africa.

Uganda Railway, the curve near Mombasa, in 1899. Wikimedia Commons/jaduland.de

Elizabeth Roche is currently Associate Professor – Practice at the Jindal School of International Affairs at Jindal Global University. She was previously Foreign Editor-Mint.

Previous The best flight-free travel tips for getting around Europe by train, from an expert insider
Next Will airport chaos continue this summer? Top tips from industry insiders