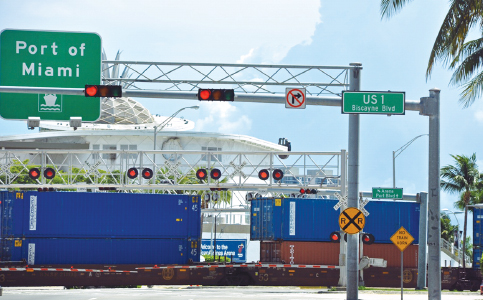 PortMiami freight increased after Covid-19 downturns and expects a conservative 3% year-over-year rate of increase as demand for all types of imported products continues to increase and new trends take advantage of closer manufacturing regions and avoid international conflicts.

Last year, PortMiami recorded strong cargo performance of 1,254,062 TEUs (20-foot equivalent units, a standard measurement of cargo), representing a 17.56 percent increase, or 187,324 TEUs, over in fiscal year 2020, the director of public affairs and communications said. of PortMiami, Andria C. Munoz-Amador. “Based on historical data, going forward, we expect freight at PortMiami to continue to grow at a conservative rate of 3% year-over-year.”

In fiscal year 2021, which ends in September, trading volume increased by 18% compared to the previous fiscal year. Trade with all regions also increased, ranging from 7% more volume with Europe, 15% more with Asia and 25% more with Latin America, she said.

Demand for all types of products continues to grow, and new trends and disruptions in the global supply chain give East Coast seaports, including PortMiami – which has an economic impact of $43 billion and creates around 334,500 jobs – a lever to receive more freight from the West Coast to the East Coast.

“Nearshoring is a new trend, [in which ports are] taking a lot of the manufacturing that’s happening in Asia, China, Vietnam, and bringing it closer to the Western Hemisphere, Mexico, Latin America,” said PortMiami Director and CEO Hydi Webb at the Summit. SMART Trends 2022 Transportation on June 3. “It’s good, because geographically Miami is perfectly located to pick up all these new shipments.”

Last November, Miami-Dade County commissioners passed legislation to support offshoring assistance — another term for near outsourcing — that would bring manufacturing closer to the West. “We envision seeing more north-south trade increase through the Port of Miami,” Ms. Webb said.

Currently, PortMiami has two Florida East Coast Rail (FEC) trains entering and leaving the port daily. Each train brings 60 to 80 containers to PortMiami from within the United States, the port’s director of communications said. Outbound trains carry 50 to 60 containers daily to central and northern Florida and the southeast of the country.

Rail freight volumes have increased in recent years, according to data from PortMiami. In fiscal year 2021, FEC trains moved 37,938 containers by rail to and from PortMiami, 52% more than fiscal year 2020, when FEC trains moved 24,908 TEUs. Volume was up 44% from the pre-pandemic level of 2019. “This means PortMiami rail volumes have increased despite business disruptions,” Ms. Muniz-Amador said.

About 5% of all PortMiami cargo is shipped to and from the port by rail, she added, and with new development projects, PortMiami expects its rail freight to increase by 20% in volume at port.

March and October saw the highest freight volume, correlating with the months that also have the highest rail volumes, with an average of 3,100 containers per month carried by FEC trains.

Seaboard Marine is the primary user of FEC rail at PortMiami, with 75% to 80% of all FEC volumes at the port and focused on Latin America and the Caribbean.

“Much of this growth [in cargo] is possible thanks to county investments over the past two years, and we are very proud to say that since the opening of Deep Dredge, we have been able to open more than 600 post-Panamax vessels that we could never have offered before this dredge,” Ms. Webb said of the $220 million deepening of the port channel of the Miami River to 52 feet in 2015.

PortMiami is also considering buying more cranes. “We have around 13 cranes, we will be tendering next year to buy [around] four more cranes,” she said.

Overall rail use jumped 47% last year compared to 2020, an increase of 45.7%. “We’re seeing people want to rail their cargo through central Florida and across the state,” Ms. Webb added. “There’s a shortage of truckers right now, so that makes rail a bit more efficient now.”

Among the various shipments transported from PortMiami by the FEC Rail Service is cotton. Cotton, Ms. Munoz-Amador said, is one of the main commodities shipped by rail to PortMiami for export to Central America, where it is to be made into clothing. The garments are then returned to Miami and transported by FEC rail to the southeast and northeast.

Garlic is also imported from the port to central and northern Florida and other areas by rail.

In addition, furniture shipments imported from Latin America increased by 135% last year; auto parts shipments increased 65%; beverages imported from Europe increased by 17%; and medical supplies have also increased over the past year, Ms Webb said at the transportation summit. “The volume coming through here is very viable and we don’t see that stopping for some time.”

“The poultry industry also uses FEC trains to transport its products by rail to PortMiami and then export them to the Caribbean and Central America,” said Ms. Munoz-Amador. “The Caribbean, in particular, is heavily dependent on the poultry supply from the United States to support its consumption and tourism industry.”

PortMiami also expects cargo to continue to grow over the next five years, from 1.25 million TEUs to 1.8 million. “We’re very proud to say that throughout the pandemic we’ve had an open channel without congestion,” Ms. Webb said. “We’ve had, over the past six years, over a million TEUs coming into port every year.”

“And after?” said Mrs. Webb. “Net zero. Net-shoring is a phenomenal, visionary and transformational program, where we see we can develop the nation’s first end-to-end net carbon reduction [port]in line with the County and Mayor’s goal of a 50% reduction in emissions by 2030.”